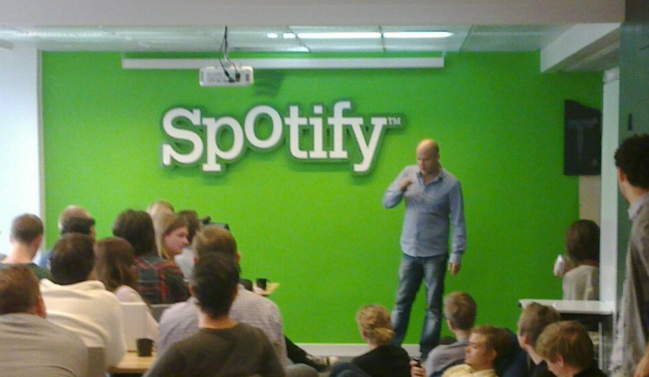 Approaching a decade in existence, music streaming service Spotify has evolved into a global brand across five continents, and it was all started by Swedish Internet entrepreneur Daniel Ek.

Ek was born in Stockholm in 1983 and spent much of his teenage years creating websites for businesses and running a hosting service both from his home.

Looking back, it was certainly an early path that began to manifest the prospect that he may well become an Internet entrepreneur, but it wasn’t until Ek hit his early twenties that his knowledge of the workings of the web allowed him to establish his own service.

Spotify was the first major music streaming service of its kind, ignoring the traditional methods of downloading tracks by making all of its music database exclusively available to listen to on the web.

It was this idea that music on Spotify was simply available to just be streamed as opposed to downloaded and owned; a common method adopted by many Internet users up until this point; was one that caused initial scepticism of the service among technology experts.

But upon its launch in April 2006, Spotify quickly became popular with both users and investors alike. Ek had tapped into a unique market that YouTube had identified in video terms the previous year: if people wanted to listen to music, what was more important to them – ownership or access?

Countries where Spotify is currently available

It appeared that Spotify had become a key figure in changing the landscape of the way music is made available to its audience. As the service continued to grow in popularity throughout the late-2000s and early-2010s, an app was launched for mobile and tablet platforms, and Spotify Premium came into being; a subscription service that removed adverts in-between songs that still appear on the free version today.

The service does also raise the debate of whether artists who have their music hosted on Spotify are fairly compensated. There have been cases of high-profile artists pulling their music from Spotify completely, and others who were less reluctant to make their albums and tracks available.

For that reason, Spotify will always be rejected by some, as much as it will be loved by others. Being one of the first of its kind, there is a sense of brand loyalty with Spotify that will ensure it retains its users, regardless of competition.

Quite a venture for Ek then, and it will no doubt be interesting to see the next steps taken by all online music streaming services.