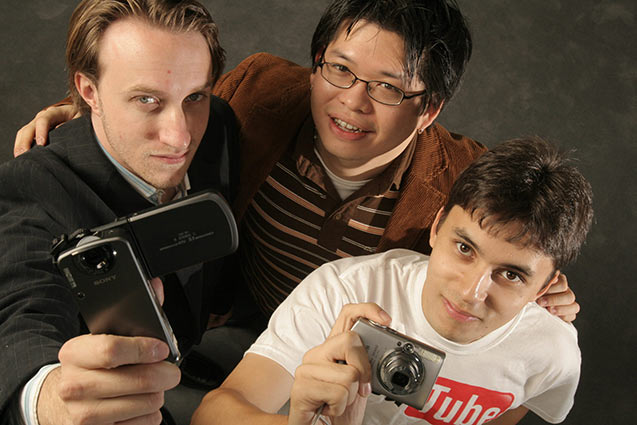 Founded by three former PayPal employees above a pizzeria and Japanese restaurant in February 2005, Chad Hurley, Steven Chen and Jawed Karim had an idea that would revolutionise the way we think about videos, films and sharing our stories with the world.

Whether it be a Television Programme based around showing hilarious YouTube comments, an unsigned band sharing their new music video with the world or your pet dog riding a skateboard, YouTube is the place to find anything and everything.

The story goes that Chad Hurley and Steven Chen developed the idea for YouTube during the early months of 2005 after they struggled to share video clips at a dinner party at Chen’s apartment. Whether this story is true or created for marketing purpose before YouTube video sharing was no where near what it is it today.

Karim cited as his first inspiration back in 2004, firstly when Janet Jackson had a wardrobe malfunction during a live performance at the super bowl, and then after the Indian Ocean Tsunami. After struggling to find clips of either of the events online Karim started to think of a new way for people to share video.

After a successful first year, internet giant Google saw the potential in this revolutionary software and decided to buy it for a mere $1.65 billion and is now estimated to be worth $26-$40 million which would topple Twitter at $30 million.

Fast forward to the present day and that vision has become a total reality, over 300 hours a minute are uploaded onto YouTube every hour as last reported on in 2014. Thousands of people are signing into YouTube everyday and uploading footage from drinks with friends to world halting events.

If your looking for a new band, highlights from last nights game, a catch up on the worlds latest occurrences or simply passing the time almost all of us end up on YouTube without even realising it. Its hard to think of time without the convenience of being able to YouTube something and get exactly what your looking for almost every time.

With what started as a phone clip titled “Me at the zoo” which featured founder  Jawed Karim standing in a zoo looking at some elephants quickly became the rise of Viral Video.

The term “Going Viral” is thrown around in everyday conversation like its something people have been doing since the beginning of time, and who’s to say that one singular faction can take all the credit, but one things for sure, YouTube is certainly a big player in the viral phenomenon. What can start as filming your friends in a toilet performing a cover of Shaggy’s “It Wasn’t Me”, can quickly become a viral video topping millions of views worldwide all at the click of a button.

The same rule applies for new film makers, bands, creative’s and any business from small to large. YouTube can be used to promote your new franchise or release your next E.P, free and simple to use.

What started as a platform to share videos has quickly shaped the way we interact with each other and share content and find out what’s going on around the world, all with a few taps of a keyboard. Who knows what the future holds for this revolutionary company.